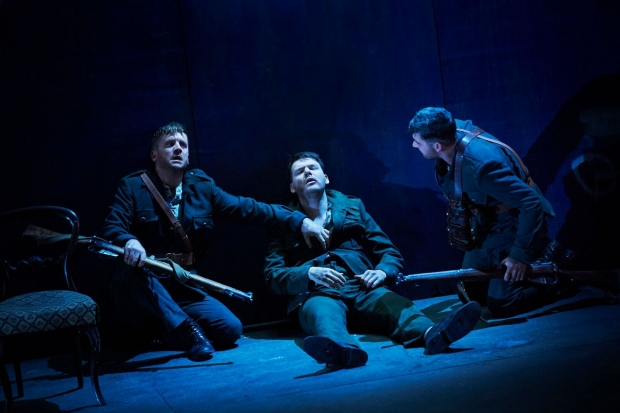 Sean O’Casey’sThe Plough and the Starspremiered in February 1926 at the Abbey Theatre in Dublin. Opening nearly a full decade after the 1916 Easter Rising, the play brought the rebellion’s divisive legacy directly onstage at the new Republic’s national theater.

For several years already, O’Casey had been a favorite son of the Abbey Theatre. InThe Shadow of a Gunman(1923) andJuno and the Paycock(1924), O’Casey had established himself as the brilliant voice of a new generation. Weaving a passionate lyricism from contemporary street speech, he helped to bring the inhabitants of Dublin's tenements—and their struggles in famine, war, and grinding poverty— into the national spotlight.

InThe Plough and the Stars, though, O'Casey's skepticism for easy narratives of heroism cut dangerously close to stories newly enshrined in national mythology. In a 1924 letter to Abbey Theatre co-founder Lady Gregory, O'Casey called the work "my most ambitious play." Lady Gregory was eager to produce it after reading an early draft, but some of the Abbey Theatre's other leaders felt that O'Casey's ambition had carried him too far.

The Abbey Theatre's Board of Directors' initial objections centered on claims of vulgarity. In a 1925 letter listing his complaints, George O'Brien wrote that "the vituperative vocabulary of come characters occasionally runs away with itself." He objected specifically to indelicate references to religion, references to lice, sexual expressions, and the inclusion of Rosie Redmond, a prostitute, in the cast of characters.

Michael Dolan, another board member, agreed, writing to Lady Gregory that "At any time I would think twice before having anything to do with it. The language is—to use an Abbey phrase—'beyond the beyonds.'" With Lady Gregory and W. B. Yeats' continued support, however, the play was brought to production with minor edits.

On stage, O'Casey's irreverence proved combustible. At opening night, the playwright received a standing ovation and largely positive reviews, but signs of trouble became evident asword about the production spread. Audiences objected not so much to vulgar language in its own right, but to O'Casey's unceremonious treatment of national icons.

Audiences eager to see the Rising depicted in a positive light began to organize against the production. Resentment built specifically around Act II, in which two Volunteers carry an Irish tricolor into a pub. At the second performance, Kevin Holloway (the Abbey Theatre's architect and a passionate theatergoer) recorded that, during the pub scene, "the pit door had to be shut in order to avoid a rush on it." At the third performance, audiences audibly protested both the appearance of the flag and the presence of Rosie Redmond.

At the fourth performance, on February 11, these premonitions of trouble exploded. During Act II, the audience began to heckle so loudly that they drowned out the speech of the actors onstage. In Act III, a mob of audience members— led by Hannah Sheehy-Skeffington and a group of other widows of Easter Week—succeeded in rushing the stage.

According to a report by theManchester Guardian, a general melee erupted in the theater. Actors halted their performance to try and force the intruding audience members offstage, while theater staff attempted to lower the curtain. They were not successful: more audience members rushing onstage ripped it down. TheGuardianreported that, in addition to these onstage altercations, "the pandemonium created a panic among a section of the audience, who dashed for the exits and added to the confusion"—with more fighting breaking out along the way.

According to a report by the Manchester Guardian, a general melee erupted in the theater. Actors halted their performance to try and force the intruding audience members offstage, while theater staff attempted to lower the curtain. They were not successful: more audience members rushing onstage ripped it down. The Guardian reported that, in addition to these onstage altercations, "the pandemonium created a panic among a section of the audience, who dashed for the exits and added to the confusion"—with more fighting breaking out along the way.

The melee was finally interrupted when Yeats, accompanied by police officers, took the stage. Referencing the then-legendary riots which had greeted the 1907 premiere of J. M. Synge’s
The Playboy of the Western World, Yeats waved the crowd to quiet and shouted (reportedly), “I thought you had got tired of this. It commenced fifteen years ago. You have disgraced yourselves again. Is this to be an ever-occurring celebration of the arrival of Irish genius? Once more you have rocked thecradle of genius....The fame of O'Casey is born tonight.” With the help of the police, order was restored in the house, and the play closed its scheduled week-long run with only minor further disruptions (police were stationed in the house for each performance).

Following the riot, however, a war of words erupted in the “Letters to the Editor” sections of many papers across the country. For weeks, Catholics, feminists, veterans, critics, and O’Casey himself battled in print about the right of the theater to depict the Rising in a less-than- holy light. The debate spilled into larger themes, including the overall artistic merits of O’Casey’s work. The print battle concluded in an in-person debate between O’Casey and Hanna Sheehy- Skeffington. Crippled by ill health, O’Casey performed poorly, leaving the controversy largely unresolved. A remount in May 1926 was greeted with threats, protests, and stink bombs released in the theater.

Despite (or perhaps, as Yeats forecasted, fueled by) these scandals, O'Casey's fame both in Ireland and abroad continued to grow.The Plough and the Starshad successful subsequent runs in London, and the play made its U.S. debut in 1927, performed by the Irish Players in New York City. That production was followed by four Broadway revivals between 1934 and 1973, and a 1936 film by John Ford.The Plough and the Starsdebuted in Boston in 1935 at the Hollis Theatre, produced by the Abbey Theatre Players and featuring actors from the Dublin premiere. (Earlier in 1935, Boston Mayor Frederick W. Mansfield bowed to complaints from religious groups and banned the Abbey Theatre's production of O'Casey'sWithin the Gates, slated to premiere at the Shubert Theatre.)

As this brief production history suggests, O'Casey's play marks more than the events (or a single perspective on the events) of the Easter Rising. A century since that event, the Rising's mixed legacy lives on in both the play itself and in its larger history.

This article originally appeared in theA.R.T. Guide in August 2016.